Rocks of all sizes were jutting out at different angles. Standing silently for millennia and more, they have watched humans evolving from cave man to modern man.

The rocks looked lived in and ancient, with high roofs and smooth edges. Early humans lived in the cavernous holes which were naturally formed.  It was a time when humans were transitioning from the nomadic life of hunter / gatherers to a settled life of agriculture and farming.

Someone had an idea to capture these images of daily life on the walls of the caves, their home and place of shelter. Maybe they wanted to beautify their homes…the evolving artists 🙂

Some stone walls have figures of men and animals scribbled on them. The pictographs found on these rock walls are simple stick figures. Maybe the people who drew them were at an early stage of human evolution.

The palette consisted of red and white pigments which were naturally available minerals from the earth. Red ochre for Red and limestone or calcite for white. Branches or sticks were used as paint brushes.

How did these images survive the sands of time?

The rocks are sedimentary, so the mineral paint was absorbed into the rocks and have endured thousands of years of wind and weather.

Scenes from daily life are predominant. Humans, animals, birds and fruit feature on the walls. Some walls depict fights between clans, hunting scenes and even celebrations. 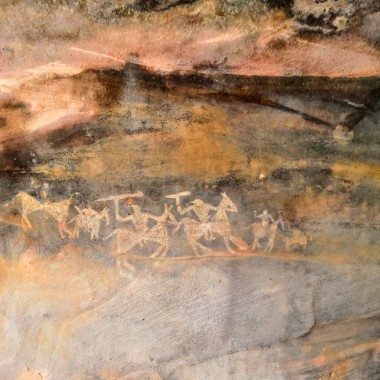 An overlap between the pictographs is also clearly seen, which indicates that several generations had made this their home over the centuries and were very eager to record their lives for the coming generations.

Since the alphabet was not yet invented, these images were the only form of communication known then. They can be considered as historical records of Stone Age man and his descendants.

The Bhimbetka rock shelters are located near Bhopal, the capital city of Madhya Pradesh. A total of 243 caves are found here, but only a few are open to visitors. A permission has to be obtained from the Archeological Survey of India to visit the other caves, although there is no clarity about this.

These pre historic caves were discovered around 70 years ago by an Indian archaeologist, V S Wakankar, who realized that these rock shelters were similar to those in France and Spain.

The stone walls and floors are the oldest in the world. It was declared as a world heritage site by UNESCO in 2003. 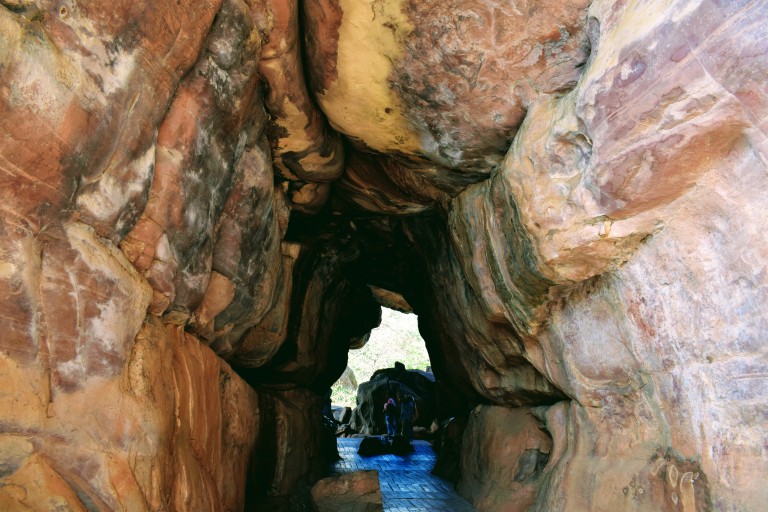 The pictographs can be divided into two groups – pre historic and historic.

The pre historic paintings have images of animals, birds and hunting scenes – the hunter / gatherer period. The image of a wild boar attacking a human, can be seen below. 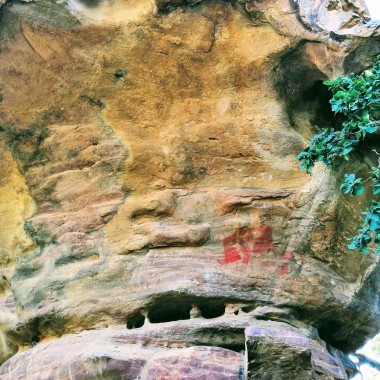 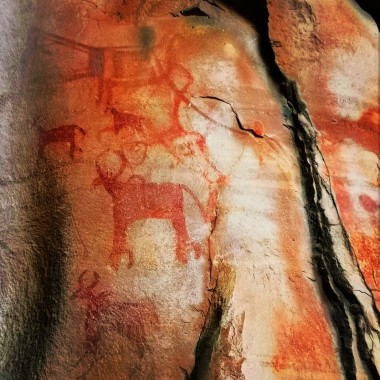 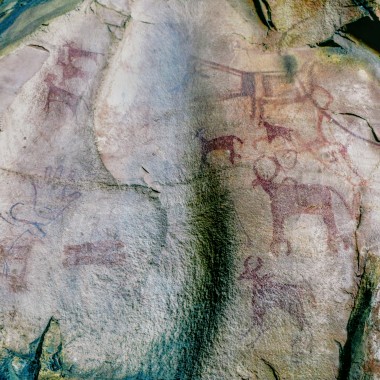 The historic paintings have images of people riding horses, carrying weapons and fighting – the agrarian period where humans had settled in one place. Man attacking an elephant and a clan going to war can be seen below.

It was unfortunate to see such a valuable heritage being left open to the elements and visitors. The lack of barricades in front of the caves, make them an easy target for vandals.

Being an offbeat destination, it may not be on the radar of things to see in Bhopal. But a visit here is memorable as you get to see up close how man lived and survived the evolution.

The public bus transport is not reliable.

If you do use the bus, it will drop you at the highway. Your landmark will be the MP Tourism cafeteria.

Behind this cafeteria is a railway crossing, which leads to the main entrance. After paying the entrance amount you have a walk uphill around 3 kms to reach the main cave entrance.

The highway near the railway crossing and the walk towards the main cave entrance are deserted so would not recommend women to travel alone.

It is recommended to hire a cab from Bhopal city to visit Bhimbekta.

You can contact Raja +91 9993374761 who runs a car rental. I was traveling on my own and I found his cab services to be prompt and safe. The rent for a full day cost me INR 3000 since I also had Sanchi Stupa in my itinerary.

The entrance fees are INR 10 per person for Indians, and parking is INR 300 – MP tourism that is steep!!!

You can hire a guide if you would like a detailed background about the rock art. The guide charges should be INR 300.

Carry water and snacks as there is no restaurant at the cave site. Wear comfortable walking shoes.

The restrooms should be avoided.

My curiosity about Bhimbekta was fueled when I stumbled upon a write up in the NatGeo Traveler Mag a couple of years ago. Since then I have been waiting for an opportunity to visit and I’m happy to have made it happen.