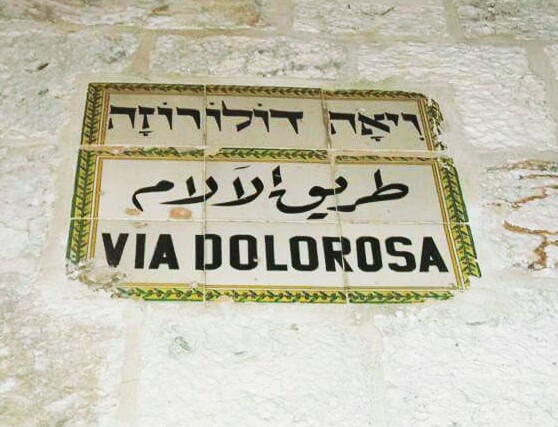 It is late in the evening. The sun has set and there is a chill in the air.

Our pilgrim group is about to begin one of the most important walks in Holyland – The Via Dolorosa, which is a Latin word for: “Way of Grief,” “Way of Sorrows,” “Way of Suffering” or simply “Painful Way”

This walk is also known as “The Stations of the Cross” – the last walk of Jesus before He was crucified.

The winding route leads to the Church of the Holy Sepulchre which is located on mount Calvary (in Latin) or Golgotha (in Greek) and is a celebrated place of Christian pilgrimage.

The Church of the Holy Sepulchre is the second most holiest place for Christians as it is the site where Jesus was crucified and  laid in a tomb.

Which is the other holiest place? Of course it is Bethlehem the birthplace of Jesus 🙂

There are a total of fourteen stations, of which nine are through the winding lanes in the old city and five are inside the Church of the Holy Sepulchre.

The map below gives an overview of the Old City. The city has several gates from which one can enter and there are two significant walls as well enclosing the city.

The mood in the group is sombre as we start the walk. The route starts just inside Lions’ Gate (Gate #1 in the map) in the Muslim Quarter, and makes its way westward through the Old City to the Church of the Holy Sepulchre in the Christian Quarter. 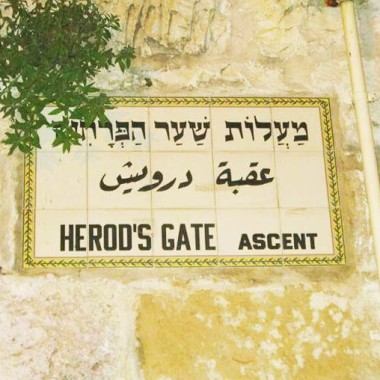 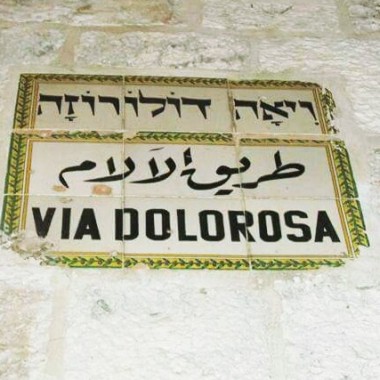 Prologue to the Stations of the Cross –

Pontius Pilate was a high ranking Roman official who served under the Roman Emperor of that time. The High Priest Caiaphas wanted Jesus dead so he had got Jesus arrested and presented Him before Pilate for a final official decision.

Pilate wanted to release Jesus, but he bowed down to crowd pressure and passed a sentence that Jesus should carry His own cross and be crucified at Golgotha.

From here on starts the painful and sorrowful journey of Jesus.

Stations One and Two – Trail by Pilate

On entering the narrow lane we are taken aback to see a bustling and busy market. Shops on either sides of the lane jostle for space selling souvenirs,  clothes, spices, perfumes, holy Christian articles and what not.Even though this is one of the most sacred routes for Christians, life goes on here for the locals. 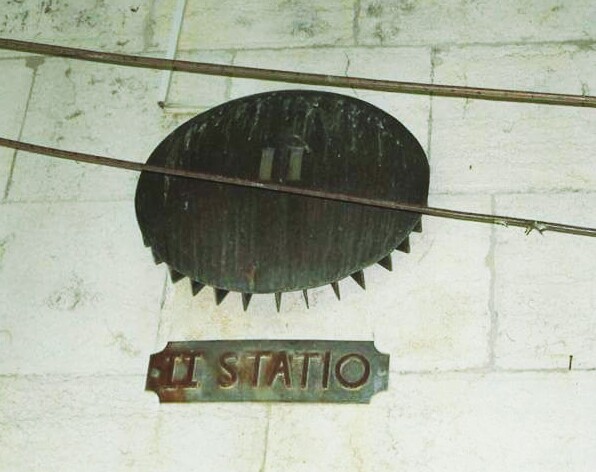 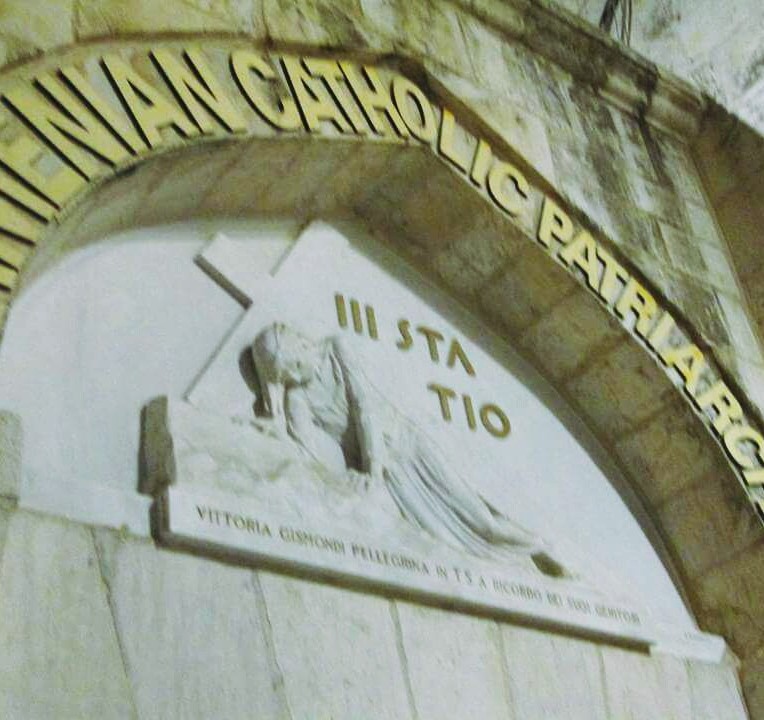 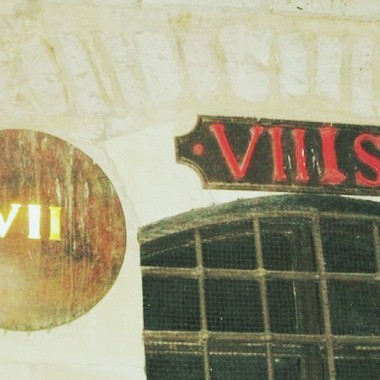 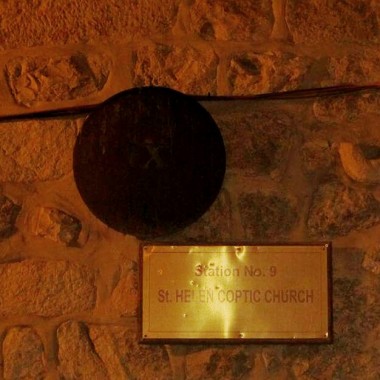 These four stations commemorate the encounters between Jesus and the people in the streets. 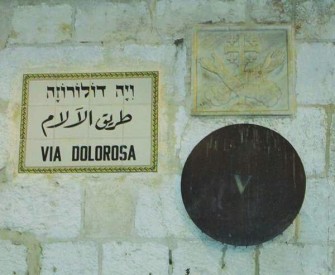 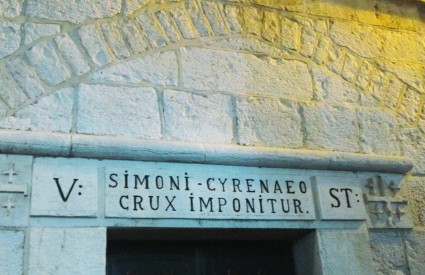 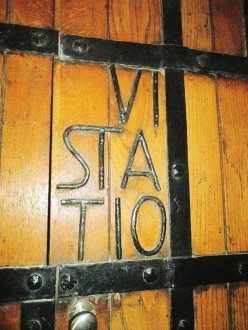 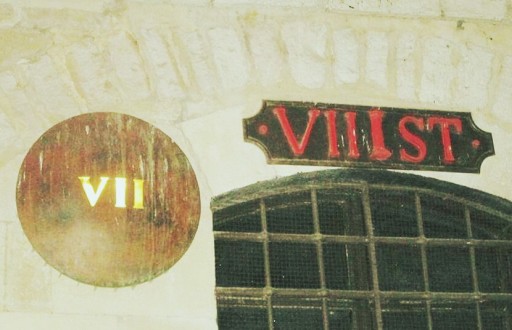 Stations seven and eight are in close proximity to each other, connecting the events of Jesus falling the second time (station seven) and women crying (station eight)

Stations Ten to Fourteen are inside the Church of the Holy Sepulchre. 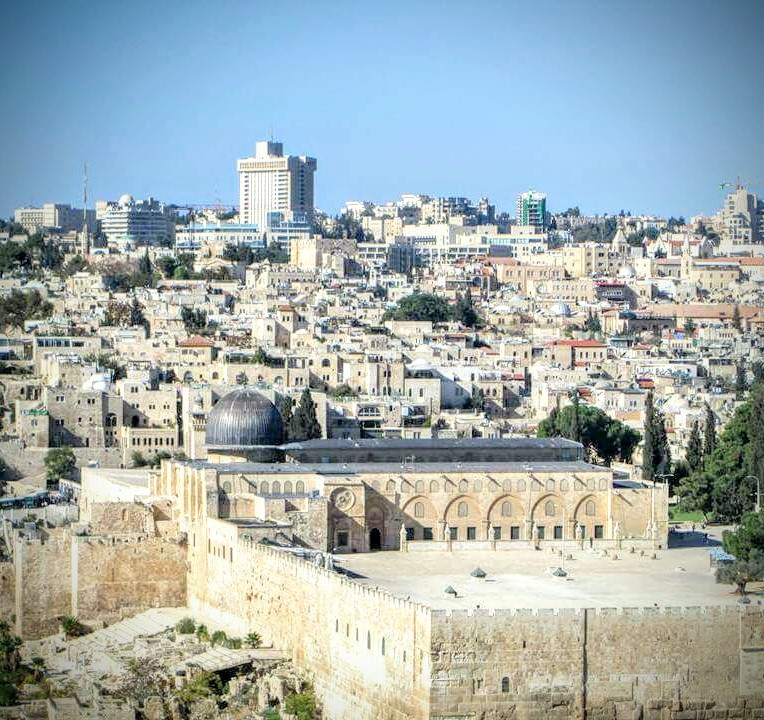 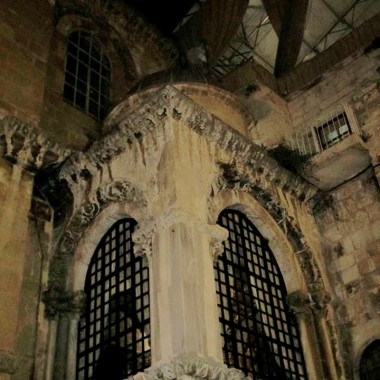 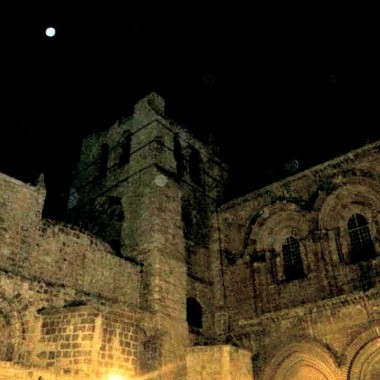 The Rock of Calvary is the twelfth station – Jesus dies on the Cross. The world remembers the death of Jesus every Good Friday.

A round opening marks the spot where the Cross of Jesus was raised. An altar stands above this opening. This is the most holiest site for Christians.

There was a long queue near the altar. People from all over the world were seen standing in line waiting their turn to pay their respects. We got to feel and touch the place where the cross was raised. Greek Orthodox priests were around the altar, chanting the evening prayers.

The air was filled with the fragrance of incense. The altar was lavishly decorated with several small lamps, and golden filigree work on the walls. The image of Christ on the Cross is at the center of the altar flanked by Mother Mary and one of His disciples, possibly John.

The thirteenth station, Jesus is lowered from the Cross. A few women gather around the Cross along with His Mother, mourning and weeping. Some of the disciples come and lower down the body of Jesus. 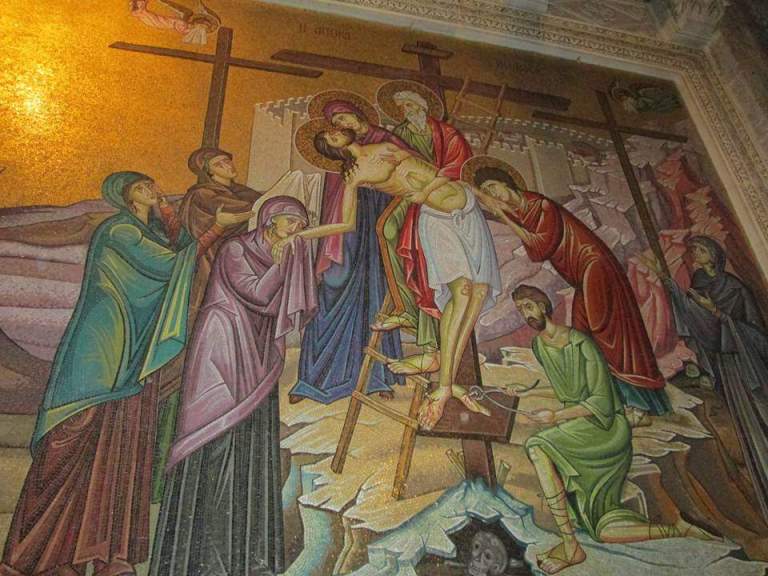 Just inside the entrance to the church is the Stone of Anointing, which tradition believes to be the spot where Jesus’ body was prepared for burial.

Now Jesus had several followers and one of them was a rich man Joseph of Arimathea. He donated his own tomb so that the body of Jesus could be laid to rest there.

The Stone of Anointing can be easily accessed by people as seen below. People place various items on the Stone in belief that it is the stone where Jesus was laid. 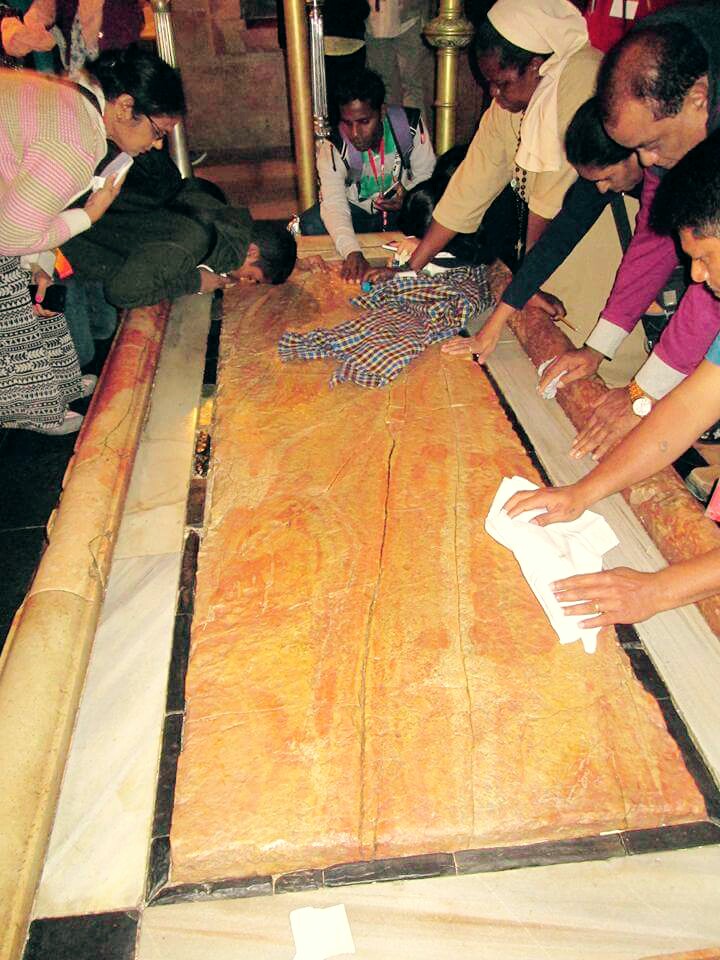 The stone is beautifully decorated with lamps. The mosaic along the wall depicts the anointing of Jesus’ body. 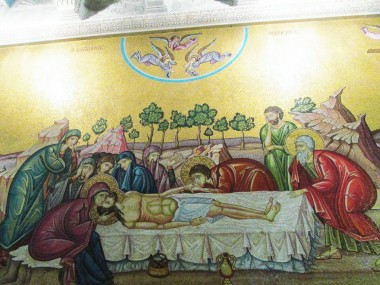 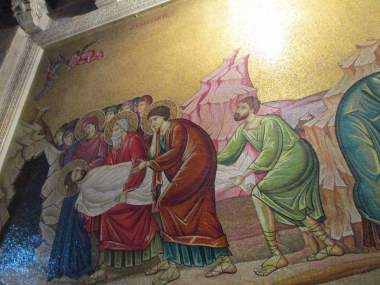 The tomb where Jesus’ body was laid to rest is in a chapel called the Aedicule and is the fourteenth station. The tomb is the Holy Sepulchre.

The chapel has two chambers. The first chamber contains the stone that was rolled over the tomb and the second chamber is the actual tomb.

It was almost closing time when we were at the chapel. A small blue light shone dimly as I entered inside. I could instantly feel that this place was special. The priest urged us to hurry up, so no time to ponder, just  a  quick touch to the stone and I walked out.

So what happens next? It was from this tomb that Jesus rose from the dead on Sunday, a victorious triumph over evil.

The Via Dolorosa was a privileged walk for me and I feel blessed to have walked the way of the Cross.

For more stories about my visit to the Holyland read – Holyland